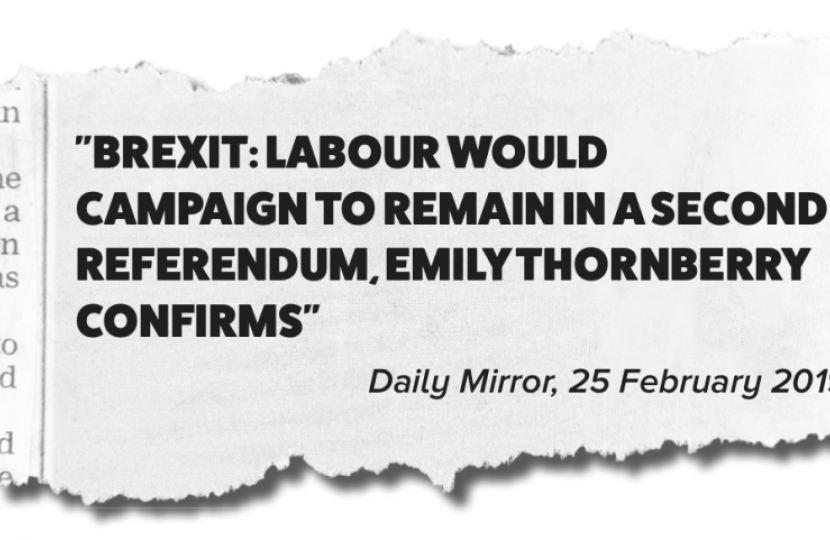 Being an MP is a matter of taking decisions and honouring your promises. Last night, as promised, I voted against the Withdrawal Agreement. As the Attorney General’s own very honest advice made clear, the potential for our being trapped by the EU in the backstop had not been solved.

The focus now shifts to what comes next – and I need your help.

At the last election, both main parties promised to respect our vote in the EU referendum. But now Labour are planning a second referendum, and their Shadow Foreign Secretary says they’d campaign to Remain in the EU.

Labour MP John Mann says: “For far too long, traditional Labour voters have been ignored by the party. My voters are fed up with being patronised by a London-dominated, metropolitan elite within the Labour Party who seem to think they know best for what they want and why they voted to leave the EU.”

I agree with him, and I know lots of you do to.

But if we want to stop this, we all need to stand up and be counted. So if you’re a constituent here in Middlesbrough South and East Cleveland, please spend 30 seconds to SIGN UP using the website below to send a message to Jeremy Corbyn through the Labour candidate: we don’t want a second referendum and he should rule it out.

Here's my opening speech at the 22/07/21 Westminster Hall debate on the UK's presidency of the the 2021 United Nations Climate Change Conference.

This is the UK's chance to take bold leadership as global leaders in decarbonising our economy and creating a safer, cleaner future.