Brexit Withdrawal Agreement - Why I cannot support the proposed deal 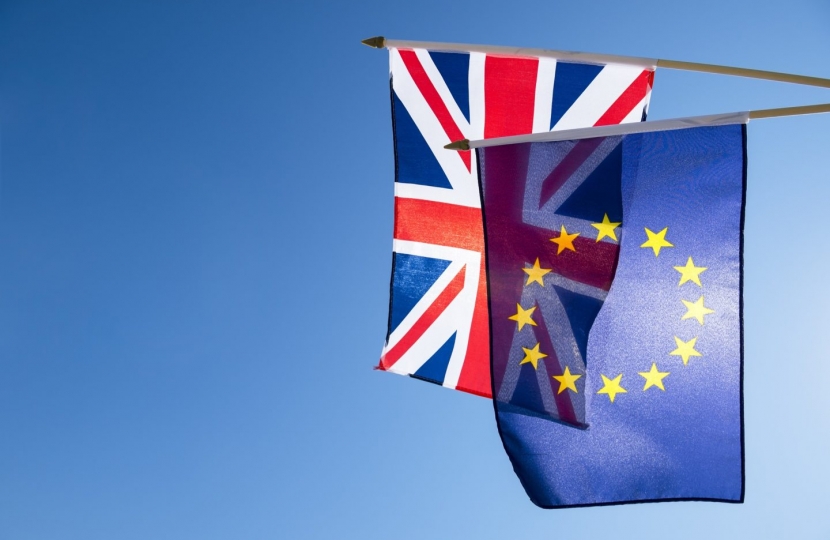 On 14 November, the Government published the proposed Withdrawal Agreement with the EU alongside a short political declaration on the future UK-EU relationship.

To be clear, the Withdrawal Agreement would be - if passed - a legally binding text, and deals with separation issues such as citizens' rights, the financial settlement, and the Irish border. The political declaration, however, is not legally binding, and would only be expanded upon and converted into legal text during the transition period beginning 29 March 2019.

On 11 December, Parliament will be asked to vote on whether or not to approve the Withdrawal Agreement and political declaration, which will be presented to us as an inseparable package. Regrettably, after very careful consideration, I have decided that I am simply unable to support this proposed deal. This letter explains why.

The most fundamental problem with the Withdrawal Agreement (although it is certainly not the only one) is the "Backstop" arrangement which stipulates that if the EU and UK cannot agree a future relationship within the short period of the transition, the UK will enter a Customs Union with the EU.

Because we will no longer be an EU Member State, this means Brussels would control 100% of our trade and customs policy, and preclude the UK's right to sign trade deals with the rest of the world.  This would happen without our having a vote or a voice at the table.

Worse, when the EU signs a trade agreement with another country (for example, China), we would be compelled to make all the concessions agreed to by the EU, but China would only need to offer its concessions to the EU 27, not to the UK. Put bluntly, we would become the EU's expendable bargaining chip in negotiations.

As recently confirmed by the Head of UK Customs, this regulatory divergence would require the introduction of paperwork for those who wanted to trade between Northern Ireland and the rest of the UK. This not only breaks up the Union, but directly contradicts the repeated assurances from the Government that such a thing would never happen.

Ministers insist that the Backstop would only be temporary but, in truth, the UK will not be able to leave it without the EU's consent. This arrangement is almost completely unprecedented in international law, especially for a country the size of the UK. Almost all international treaties include a clause that allows parties to unilaterally withdraw from the agreement.

The Government's (well-meaning) justification for this Backstop is that it is an 'insurance policy' to avoid a hard border in Ireland. This justification implies that, without a negotiated future relationship, a hard border would materialise. All the evidence suggests that this is simply untrue. There are only three parties who could insist upon customs infrastructure on the Irish border: Ireland, the EU, and the UK. Leo Varadkar and Jean-Claude Juncker have already stated explicitly that Ireland and the EU respectively will not, under any circumstances, introduce infrastructure at the border.

In evidence to the Treasury Select Committee last week, HMRC told me what they've been telling us for months: "The UK has been clear that under no circumstances will we be putting in any infrastructure or any associated checks at the Irish border. Even if there is no deal."

It is therefore incorrect to call the Backstop an 'insurance policy', as there is no risk against which to insure ourselves. The Backstop is purely a political choice, not a customs necessity, still less a requirement for peace. Regrettably, the Government has allowed the EU to use the sensitive issue of the Irish border as leverage to achieve their preferred negotiating outcomes.

Ministers are also incorrect when they say that the Backstop need never come into operation.  Although (as demonstrated above) it is entirely unnecessary, if it remains in the Withdrawal Agreement, its implementation will indeed be inevitable. The Backstop could only be avoided if the Government's plan for resolving the Irish border is agreed to, and implemented, by the end of the 21-month transition period.  This plan is likely to be the so-called 'Facilitated Customs Arrangement' set out in the Chequers proposal in July.

However, in evidence to the Treasury Committee, HMRC told us that the Facilitated Customs Arrangement would take at least 24 months to implement. The Government's 24-month plan for the Irish border will therefore not be ready before the end of the planned 21-month transition.  This means - unless the EU allow us to extend the transition period in return for billions more of tax-payers money - we will automatically enter the Backstop.  For this reason, the Government's reassurance that they don't "intend" to use the Backstop is redundant.

If and when the Backstop did come into effect, the price we would pay to exit would likely be enormous.  This would not just be in monetary terms.  On 25 November, the very day the Withdrawal Agreement was agreed at EU level, President Macron gave a speech saying France would use our being trapped in the Backstop as "leverage" to ensure French fishing access to UK waters in future negotiations.  With the Spanish angling for greater control over Gibraltar as well, the threat the Backstop poses is there for all to see.

In reality, as can be seen, the arbitration panel that will be set up to resolve disputes between the UK and the EU will be ultimately answerable to the ECJ, and its rulings will be binding.  Given the enormous scope of EU law, a very large number of issues would continue to fall under its jurisdiction.

Moving on to the political declaration, which is a mere 26 pages compared to the 585 pages of the Withdrawal Agreement, this provides very little certainty about the true nature of the future relationship.  I think local people would be less than happy were I to sign away thirty-nine thousand million pounds of their money on this basis.

Most of what we do know about the Government's intentions for the future relationship was set out in the Chequers White Paper published this summer. To my mind, the proposals in this White Paper were wholly unsatisfactory and fail to deliver a proper Brexit of the kind that two-thirds of my constituents voted for.

In summary, the proposals: fail to regain parliamentary sovereignty over standards in manufacturing and agri-foods; severely limit our ability to strike meaningful trade deals with the rest of the world; and create space for the continued jurisdiction of the ECJ over UK law. They also propose ultra-high alignment with the EU rather than the Canada-style free trade deal we should be aiming for. There will be so-called "non-regression clauses" to ensure the UK cannot out-compete the EU. This would scupper our hopes of being a global trading titan and bind us into EU manufacturing rules in perpetuity.

As I have told the Prime Minister personally, in being asked to support the proposed Withdrawal Agreement and political declaration, my loyalty to my Party and her has been set in opposition to my loyalty to my constituents and country. This pains me very deeply but I am in no doubt that my higher loyalty lies to what I believe to be the national interest.

For many months, I have been doing all that I can to constructively engage with the Government and persuade them to change course. Regrettably, however, the Prime Minister has been unwilling to countenance any change of direction. I have therefore come to the unwelcome conclusion this disastrous policy is inseparable from the Prime Minister herself. As long as she remains in office, the policy will not change. While being scrupulously polite, for my respect for her as a person is sincere, I have therefore submitted a letter calling for a confidence vote in her continued leadership.  This is the very last resort, but the consequences for our country of continuing down this path are simply too damaging to stand by silently.

What is the alternative?

The Government's position is that although this proposal is unsatisfactory, there is no realistic alternative.  Although an incredible amount of time has been wasted, I believe a deal may still be salvageable, based around the broad and generous offer made by European Council President Donald Tusk in March.

This would be an advanced Canada-style free trade agreement, encompassing services and covering all sectors with zero tariffs and no quantitative limitations. Alongside this the UK would offer deep security cooperation and mutual recognition of practical issues from aviation regulations to driving licences.

The EU's Canada-style offer, of course, was made to Great Britain and not the whole of the UK. The EU was not prepared to extend its offer to Northern Ireland - hence so much of the tortuous negotiation that has ensued. However, as explained above, all sides in the negotiations have already confirmed that they will not erect customs infrastructure in Ireland under any circumstances. A whole host of customs experts have also given evidence to various Committees in Parliament stating that existing technologies and administrations could create an operational border without physical infrastructure. The UK should therefore go back to Brussels and insist they stop abusing the sensitive issue of Ireland as leverage to keep us in a customs union.

Practically speaking, the UK should propose a free-standing treaty on trade facilitation between the UK and Ireland to be negotiated in parallel to the wider negotiations. Such a treaty would deliver an invisible border that would satisfy WTO rules and could be referenced in the wider UK-EU free trade agreement. There would be no hard border and no need for a backstop beyond this.

This seems to me to represent a deal that could satisfy Brussels and pass the House of Commons.  It should certainly be attempted.

A key question is what happens if there is "no deal".  The first thing to say is that this does not mean Brexit will not happen. The EU Withdrawal Act 2018, which we passed earlier this year, is clear that our exit day is 29 March 2019 with or without a deal.  The "meaningful vote" we are about to have will be purely on the proposed deal, not on whether we leave or not.  People in Parliament may well try to frustrate Brexit, but a simple vote will not overturn the Act - only new statute can repeal statute.

The second thing to emphasise is that a "no deal" is itself an inaccurate description.  If there is no trade deal with the EU, the UK would leave and trade on World Trade Organisation terms - exactly the same as we do already with the rest of the world.  Peter Lilley has written an excellent briefing paper, Fact not Friction, which can be found here: https://globalbritain.co.uk/wp-content/uploads/2018/11/Global_Britain_Fact_not_Friction.pdf. In sum, whilst there would be some turbulence given the absence of a transition period, there would be no reason for panic.

Given this scenario cannot be discounted, I have made it clear that no more time should be wasted without setting a national effort in motion so that the Government and businesses prepare themselves day and night between now and 29 March next year for this outcome.

Every moment that passes without such an effort is a moment wasted, and weakens our hand in securing the good Brexit deal that our country expects and deserves.

I hope this makes clear why I do not think the existing offer is right for our country, and why I cannot in good conscience support it.

I want to reassure my constituents that I am very conscious of how serious the situation is and have taken the position I have only after careful study and much reflection. I hope it will be recognised that my primary consideration has always been, and will continue to be, my constituents and our country.