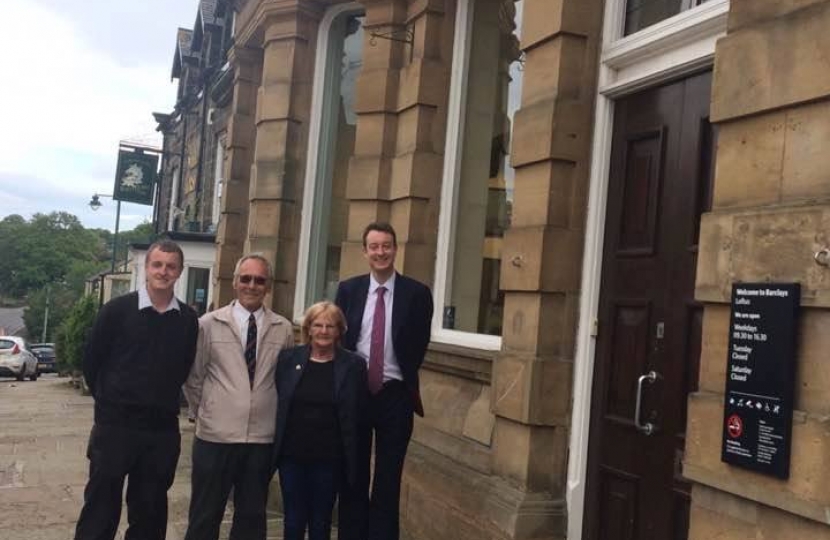 Simon wants to improve connectivity in our area in all its different forms, from tackling poor internet quality in Coulby Newham to ending the culture of neglect that has seen some of East Cleveland's towns like Loftus abandoned and ignored for far too long.

This culture of neglect has manifested itself in insufficient transport links, below par broadband connections, and dwindling public services.

Back in July, Simon heard first-hand from local people about how badly they want Barclays UK to reconsider its plans to close its branch in the town.  Here, Simon is pictured outside the branch with local councillors Wayne Davies and Mary Lanigan together with Loftus Mayor Mike Hodgson.

In order to tackle the issues head-on, Simon will be holding frequent town hall meetings in addition to his regular surgeries.

Improving ambulance response times can make the difference between life and death. As your MP, I am keenly focused on this issue - especially in East Cleveland where population sparsity is a challenge.

I know how important it is to improve public transport connections across rural East Cleveland. This is an issue I have discussed extensively with Arriva and I was personally disappointed by their recent decision relating to changes to the 5/5A service east of Skelton.

A good meeting with the new leader of Redcar & Cleveland council

I really welcome the way that local people used May’s local elections to vote for positive change. I will be meeting new Middlesbrough Mayor Andy Preston soon, and sat down last week with the new Leader of Redcar and Cleveland, Councillor Mary Lanigan.

I'm a big supporter of the cross-party campaign to deliver huge investment in rail transport in the north, led by The Northern Powerhouse Partnership.

Talking very frankly with the BBC

I was a guest on today's BBC Sunday Politics. I spoke from the heart about how strongly I feel about honouring my promises. I don't think this month's European elections should be taking place, I won't campaign in them, and I won't support a Customs Union with the EU.

A great day out at the Klondike!

It was great to join so many friends for the amazing East Cleveland Klondike today - including lots of Conservative council candidates at the heart of their communities.

No story has captured our imagination more than the heroic work of Ben Houchen, our Tees Valley Mayor to rescue our airport.

That new future began this week. The Airport is now under our ownership, run by an excellent and ambitious commercial partner in Stobart.

Today I visited Tees Valley Mayor Ben Houchen to discuss the next steps for a possible rail solution to the Marton Crawl. I'm hopeful we can investigate the case for a new train station outside Nunthorpe with a park and ride for commuters from East Cleveland.

A Community Asset for Loftus

One of the best things about our East Cleveland villages is the huge sense of community. Yesterday I was in Loftus to celebrate the beginning of Luke Senior Hall's new life after its transfer to that community from Beyond Housing UK.

A Key Moment for Our Future

This time next week, the Labour leaders of the five Tees Valley councils will vote on the most significant investment package in Teesside in our lifetimes. There is no overstating the importance of this: what is on offer will be genuinely transformational.