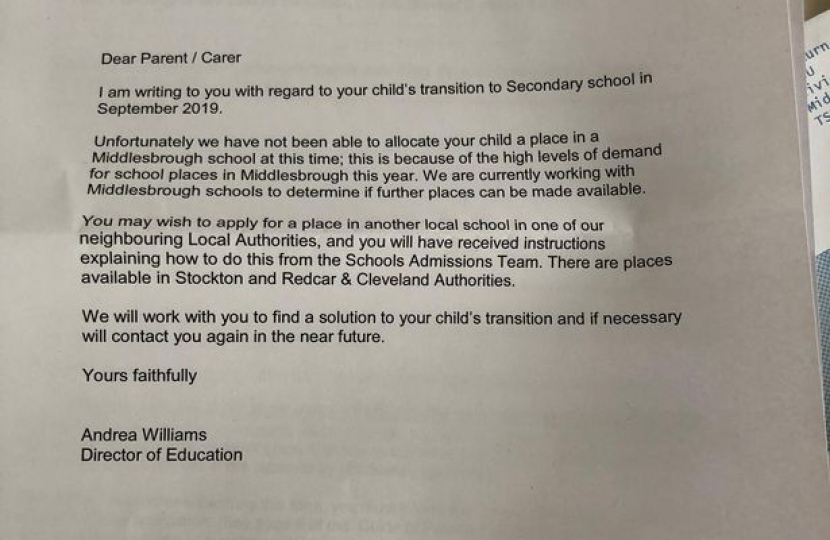 I want to update you on the shortage of secondary school places in Middlesbrough that was reported yesterday. Some of the families affected are friends and I share their frustration and concern about what is a totally unacceptable situation.

Having seen the letter that was sent to parents by the Council, I think it was lacking in sufficient apology or detail given the seriousness of the issue. While later comments clarifying the situation have been more helpful, it’s not hard to see why parents have been left upset.

I spoke to the Chief Executive at Middlesbrough Council to get an explanation. The problem has been driven by a variety of factors, including both Nunthorpe and Stokesley Schools accepting fewer pupils from Middlesbrough for next year, as well as population growth in the town.

Some of this population increase is due to unexpected short term factors (inward migration) but it also bears out the warnings many of us have made about ensuring the right infrastructure exists when adding more homes.

The hoped-for solution is a new secondary school planned for Middlehaven, which would reduce pressure across the town. The bid for this is at an advanced stage and I will be urging the Department for Education to approve it as swiftly as possible.

In the interim, the Council is working with local schools to try to reduce the shortfall from the current 80-100 to the lowest possible level.

If you are a constituent who is affected and wants help, please email simon.clarke.mp@parliament.uk.