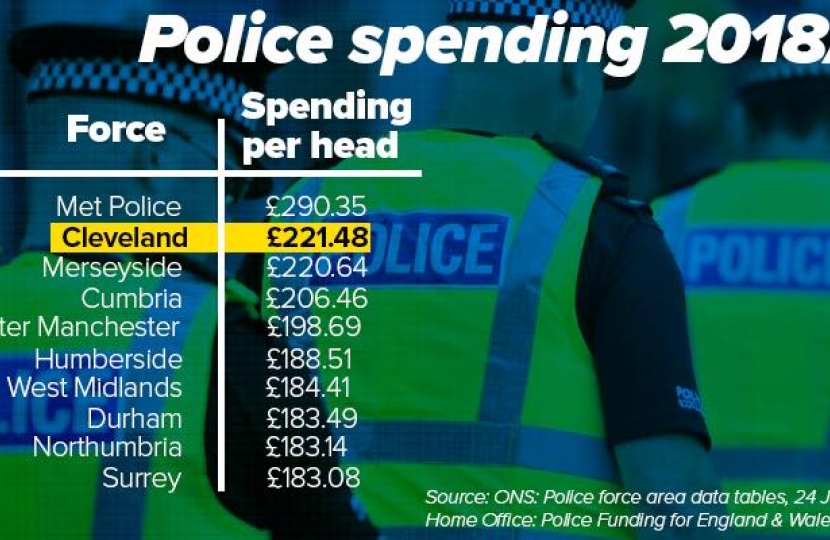 In a week where Cleveland Police have been in the spotlight, I think it’s helpful to share the facts and why I’m calling for major changes.

I am all for more funding for our Police. That’s why I voted for it in Parliament this week, while Labour used contorted logic to oppose it. I’ve also made this point in my meetings with the Home Secretary Sajid Javid, of which my most recent was on Tuesday.

But I also believe Cleveland Police need fundamental reform. As I explained in my post earlier this week, spending per head in Cleveland is the highest outside London. I compare a basket of other forces below.

Given how much better neighbouring Durham perform than Cleveland on a whole range of metrics, it is simply not good enough to say it’s all about money. It’s about leadership.

For too long, the men and women of Cleveland Police - and us as the general public - have been let down by the failures at the top of our force. I have been an MP for twenty months and we are already onto my third Chief Constable. This situation is completely unsustainable and the problems at the top appear institutional and cultural.

That’s why Ben Houchen, Tees Valley Mayor, and I are asking the Home Secretary to initiate a root and branch review of Cleveland Police, leaving open all options including merger with one of our neighbouring forces.

I have not come to this decision lightly. Indeed, I gave our most recent Chief Constable, Mike Veale, my full support as he set out an ambitious programme of reforms - the thrust of which I continue to support.

But it cannot simply be “business as usual” for Cleveland now that he’s gone. As Labour politicians rally around their embattled PCC to try to shut down the debate, Ben and I will be calling for serious reform.