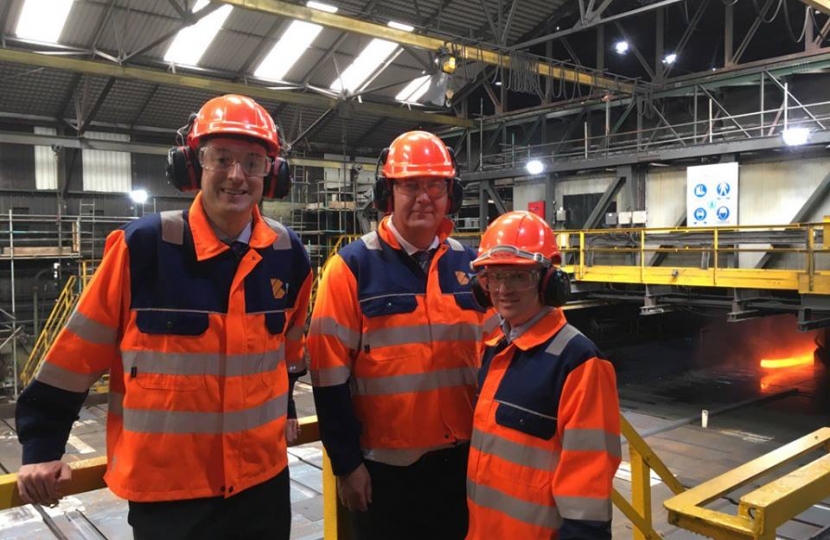 In July, Simon visited the fantastic team at Skinningrove, who recently supplied over 3000 tonnes of steel to the new HMS Queen Elizabeth. They are a fantastic example of what can be achieved with great management, a dedicated team and lots of hard work. Simon looks forward to supporting their future plans and is keen to see even greater things from them in the months and years to come.

Just four weeks after being elected to Parliament, Simon was elected to serve as the Vice Chairman of the All Party Parliamentary Group (APPG) on Steel and Metal Related Industries.

The APPG, made up of MPs from across the party spectrum, fight for a fair deal for the UK steel industry by working to raise its profile and the local people who rely on it, as well as formulating policies which will help the industry to thrive in the future.

In this role, Simon serves alongside Redcar MP Anna Turley, the APPG’s Secretary, and has written to the Minister for Defence Procurement, Harriet Baldwin seeking talks on how the Ministry of Defence can support the domestic steel industry by promoting the use of British steel in future projects.

I’ve been back in Doncaster today with Ben Houchen to discuss all things British Steel with the special working group of management and unions.

I’ve been in Doncaster this morning for the weekly meeting of the British Steel taskforce with Business Secretary Greg Clark, Ben Houchen Tees Valley Mayor, the company and the trade unions.

I'm looking forward to joining Tees Valley Mayor, Ben Houchen, tomorrow at a public meeting to update everyone regarding the situation at British Steel.

While new ownership is sought for British Steel, the overwhelming priority of everyone is to keep its plants open and people in work, and that was my message in Parliament this afternoon.

The announcement that British Steel has placed itself into insolvency is an absolute hammer-blow for steel workers and their families. My number one priority is to ensure a sustainable future for the operations at Skinningrove and Lackenby.

We all know the crucial importance of the British Steel Special Profiles business to the East Cleveland economy. It’s a great plant staffed by highly skilled and dedicated workers, and works hand-in-glove with the Caterpillar factory next door, which is its primary customer.

After a phenomenal start to 2019, from saving Teesside Airport to sealing the deal for the Tata land in Redcar, it was good to pay tribute to our Tess Valley Mayor, Ben Houchen in Parliament yesterday. It was great to hear the Government's full support in reply!

There is great breaking news this morning for the whole South Tees Development Corporation regeneration project, as Ben Houchen,Tees Valley Mayor, has finalised a deal with Tata Steel to secure more than half of all the developable land on the Redcar site.

Middlesbrough South and East Cleveland MP Simon Clarke has responded to Donald Trump’s threat to impose tariffs on steel imports by raising the issue today with Prime Minister Theresa May, the United States Ambassador and the Minister for Trade, Greg Hands.